A wargames site, by wargamers, for wargamers.
http://www.leagueofaugsburg.com/fightingtalk/

All Europeans are aware what the Thirty Years War brought to Europe, his People, his Countries and his Economy. War, destruction, ravaging Armies living from the Land, plundering, burning, raping and murdering and so on. It is a quite long list of Atrocities the Central European Countries suffered. In the wake of the Armies the Black Death found a way into the last corners of the land. As a result of this War a THIRD of the European Population died. No World War had such a Death toll like the TYW. Most of those war-torn Countries needed another 30 Years to get re-populated and flourish again...
Nevertheless..
1632 saw one Lion die but the War did not end here. Even after 14 Years it was not enough. Because the Emperor of the HRE (Holy Roman Empire) wanted to impress Catholicism upon all countries in his Domain and so the War had to go on and on and on.

Saxony, as always in the center of the boiling Cauldron of Militarism found itself, again, as a Battle field of Enemy Armies with Smaller part of its own Army changing sides several times. Not without difficulties. Saxony was until the end of the TYW the leading protestant Country in the HRE.
As a side note: Until Ferdinand II. was elected to be Emperor the Empire was about 60% Protestant and only about 28% Catholic.

So, Saxony, under the Leadership of Elector Johann Georg I., had some hard times to live through. Nonetheless, the Elector had time enough to get 10 children...

The Thirty Years War was not a War of Standing Armies but those of Mercenaries. The Few countries who tried to have standing Armies, Wallenstein's Forces in the Service of the HRE or France run fast out of gold to pay them. Wallenstein's Armada was disbanded after his Death. Therefore the Mercenaries lived from the Land by Looting.

But the results of this War lead to the Begin of Standing Armies across Europe. The TYW can be seen as the Hour of Birth of the Saxon Army.

1632. The King is dead. Also the Saxons and Swedes won the Battle of Lützen the Imperial Army stood within the Saxon Electorate. Two imperial Victories forced the Elector of Saxony to rethink his quarrels with the Emperor. He started negotiations and after some back and forth found an agreement. As the Empire was bankrupted by Wallenstein's Armada the Emperor could only offer Land. That lead for Saxony to an increase of about 1/3rd its size and another 3rd of Population. Historical Saxony had 1610 about 1.5 Million Inhabitants and about 500 ml² ( approx. 27,450Km²). The Territorial addition brought 175 ml² (9.600 km²) and about 500.000 Inhabitants.

Next Post will show the Saxon Army of the Late Period

by jambo1
A very interesting read, looking forward to the next part.

by Friedrich August I.
With this posting I will give a short frame of the Saxon Army in the time from 1631 to 1635

The Commanding officers changed several times in this Period, most of them came from other protestant Countries like Brandenburg and Denmark or from Imperial Service.

Dragoons
3 Regiments until End of 1635

Artillery
1631 the Artillery consisted of 6 x 12pdr, 12 x 6pdr. The fore mentioned 12pdrs were later replaced by 4 x 24pdr. It kept its strength over the following Years, despite of losses relatively the same.

More details in the next posting

by Friedrich August I.
The Regiments in Detail:

It has to be said that of some of them no Colors(?) are know. For those who have Color Information's the colors stand for the Standards, Flags and Guidons (Fändel) like the Fields and Stripes or ornaments. On the Trumpets were the same colors. The Ornaments showed religious or War Emblems while the written words have been in German or Latin. Also the Coats and the Collars SHOULD have been of the same scheme but in most parts reigned arbitrariness.

Names are given for the Regiment when it was raised. Names AND Owners changed several times.

The Above mustered about 1000 Horse. Between 1632 and 1642 were about 30 Companies raised under varying Commanders and most of them were short lived as they were raised and grouped together with other units.

All together the Electorate of Saxony formed it's biggest Army 1635. Numbers are between 34.000 Men up to 50.000 Men, including all kind of Camp-Followers, Horse Handlers for the Artillery and the Train.
Only 2 Years later the War had consumed 50% of it's strength and the "Reducing" begun which ended 1642 with 4 Regiments of Horse and until 1650 4 Regiments of Foot.

by Friedrich August I.
The whole point of this historical excerpt was to inform you all about a project which I initiated about 4 Years ago. One which had to stall for an uncertain amount of time after the first orders and payments.

In October 2015 I met with Steve Barber, my Friend and Sculptor to discuss the possibilities of a TYW - Project.
After we met in Derby for my last game - for a while - I started with outlining the encompassed dimension of this project.
Here the Mail I wrote in November 2015 to Steve after getting Home from England:

First:
I will divert about GBP 3000 (€ 4000) towards you to give the TYW a good head start.
Second:
The Numbers of different Miniatures for each Troop Type should be 4-5 but without Heads and with at least one moveable arm(sword arm). Arm Sets?
Third:
Starting as always with Infantry, two types, Musketeers and Pikemen, 2 Command Sets of 6 Six Figures each (we need a lot of flags).
Fourth:
Horsemen, on two or three different horses, Heavy and light as already available(Napoleonic range), two or three types, Cuirassiers, Harquebusiers and Dragoons.
In addition to the Dragoons there will be dismounted Dragoons too. Command Sets for Horse are the usual Suspects!
Fifth:
The Artillery will be large and cumbersome, fancy Guns. 3 to 24 pounders. No large numbers are needed, but different Calibres, that means Gun barrels.
No Limbers at all, as only Armies on the move have them but not on the Battlefield. There they have been stationary.

The above will give a lot of Variation by loose Heads and Arms(1) and by painting them in different colours(not really necessary) will produce many countries.

So, after 4 Years I now like to take up where I left. Steve released in the meantime several Sets of Miniatures for the TYW. They are explicitly Saxon in making but rather generic for the later Period of the TYW 1632 to 1648.
Here is a link to the Website of Steve and the TYW-Miniatures -> https://www.stevebarbermodels.com/97-28mm-renaissance

- of Pikes and Musketeers together with some Commands to form a unit of 2-3 Companies. Structure like this -> 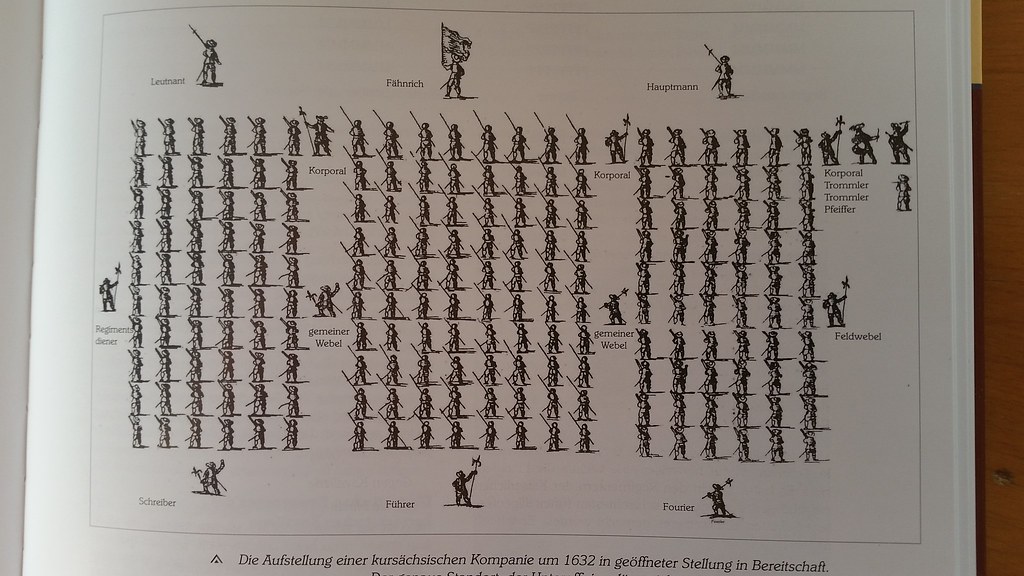 The First unit I intend to work on will be the Leibregiment, the so-called "Blue Coats". According to Steve's info they may arrive until next weekend.

by jambo1
An interesting read and looking forward to seeing your work on this. Steve Barber minis are very nice indeed, have looked at them a number of times but with all my other projects on the go I have put the idea to one side.

by Friedrich August I.
The following Pictures are showing how "Uniform" the Elector dressed his Soldiers and how they would have looked like at the start of the Conflict and the first Mustering of troops of Saxony. It will also suit for the first Year(s) of the 3rd Mustering Period 1631-1649. 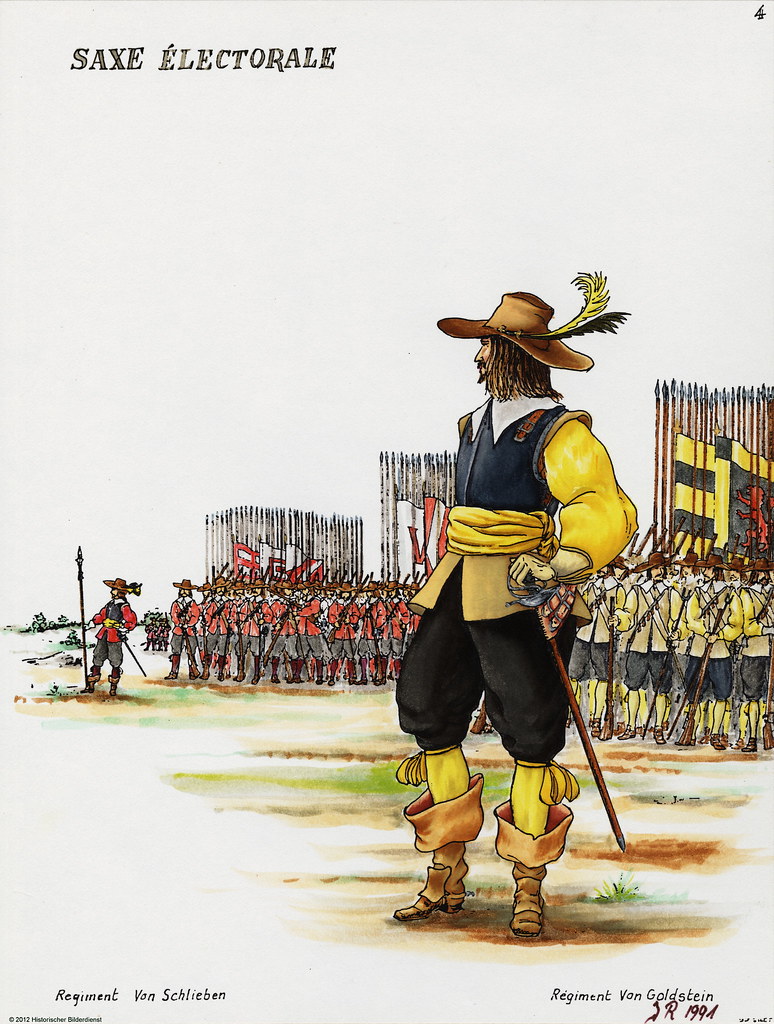 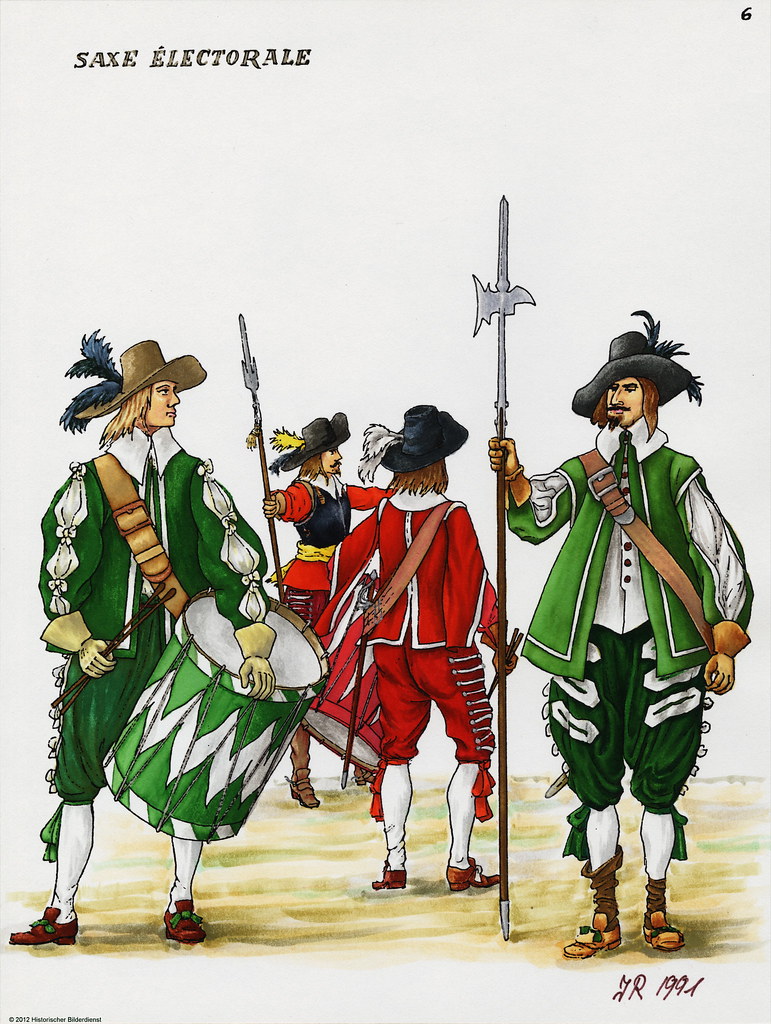 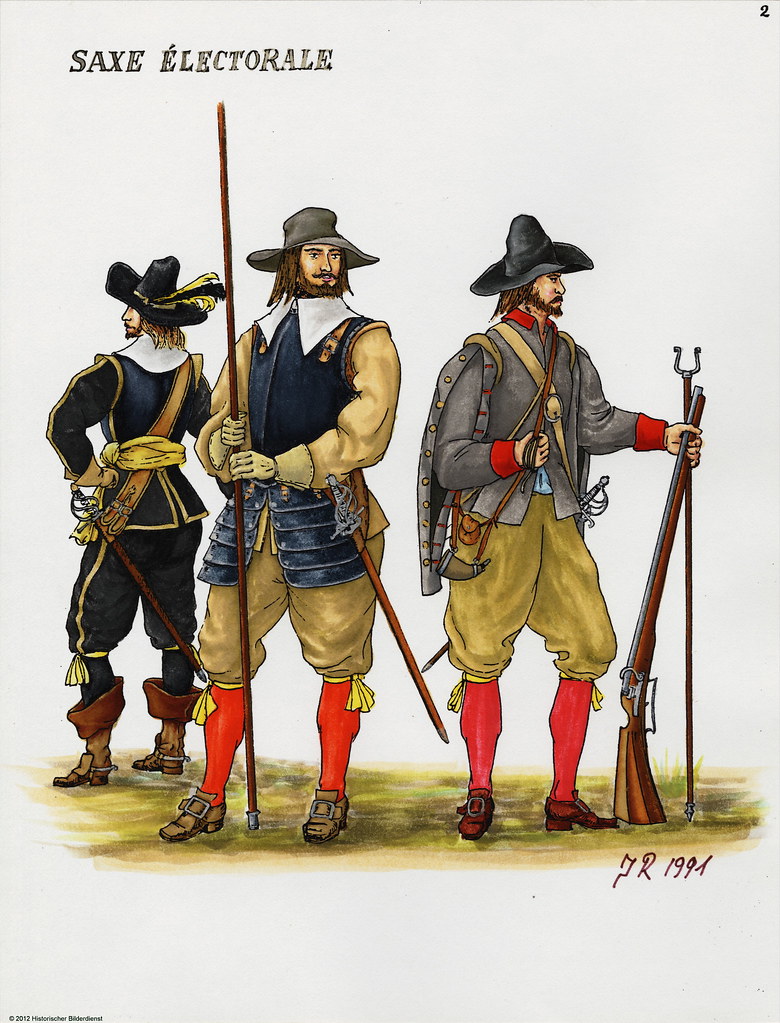 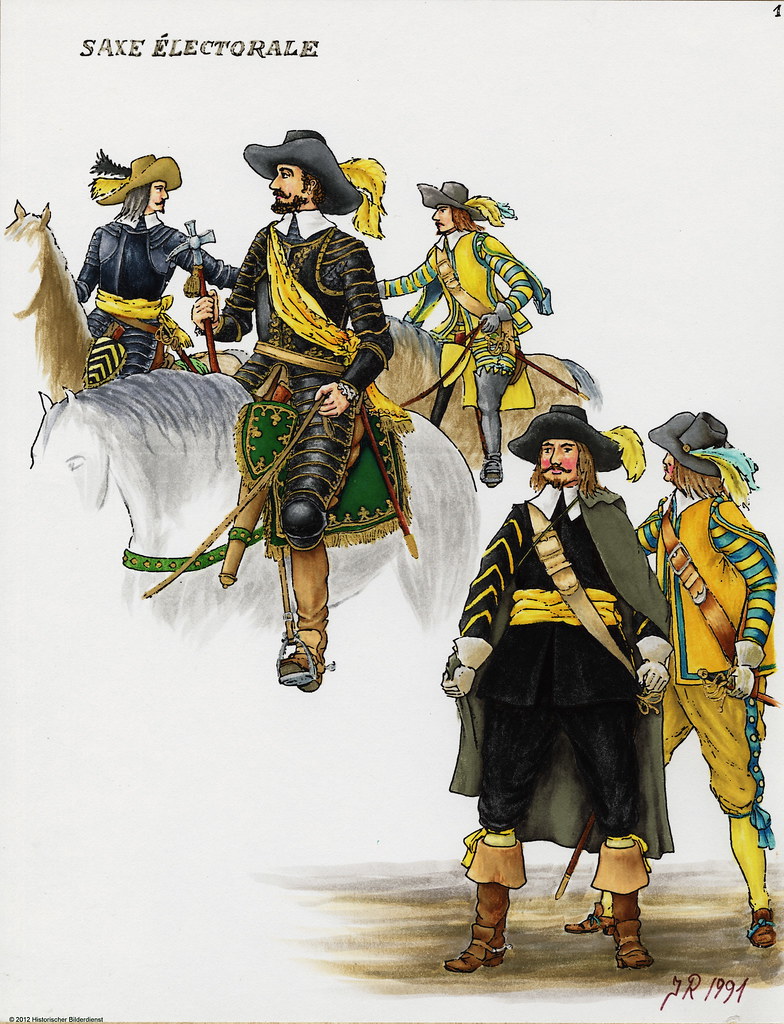 by Friedrich August I.
First Batch of Miniatures have arrived. Glued them on single Bases, for now, 60+ Miniatures with a lot of Head variants and wire Pikes. Rich in detail, Heads not glued on yet. 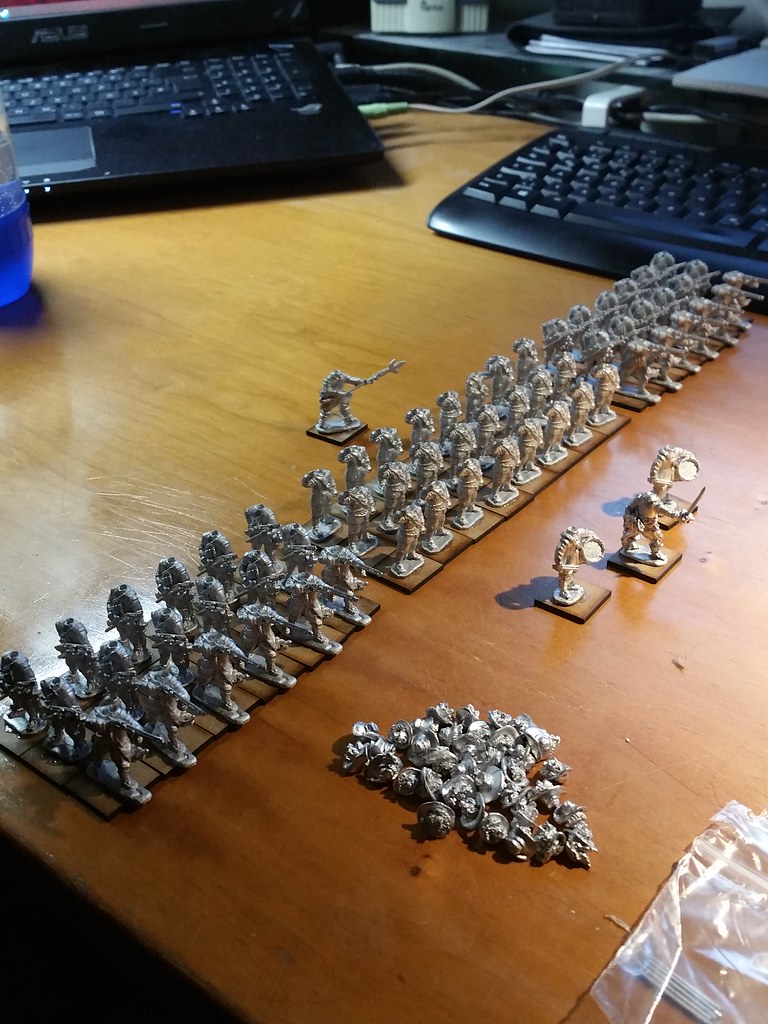 by Ben Waterhouse
Looking forward to this project as it is revealed. Lovely stuff.

by Gunfreak
Looks very promisinng, and as usual far more colour than what is shown on much media.
All times are UTC
Page 1 of 1
Powered by phpBB® Forum Software © phpBB Limited
https://www.phpbb.com/