First game and a few questions

Any questions relating to Beneath the Lily Banners rule system.
Post Reply
14 posts • Page 1 of 1

First game and a few questions

Having played our first game of BLB3 last night, I have a few questions about charges.

We played to try out the rules and had a squadron of cavalry attack a line of infantry, which allowed us to play through the mechanism.
When charging, at what point in the move do the cavalry charge home-we played it that they closed as soon as the test to close was complete, this left the other three squadrons advancing in support allowing them to, hopefully, take advantage of any gap in the enemy line.

The melee was fought over three bounds during the turn (is this correct?) with the enemy infantry dispersing and the lead squadron taking sufficient casualties to be destroyed. Now, the supporting squadron, which reinforced the melee, was left in the open but had to check morale due to the destruction of the lead squadron, what test do they take-we assumed the test for losing a melee, would this be correct?

There seem to be quite a few tests to take during a charge but all appeared to be quite straight forward.

All in all it was a good learning game and we enjoyed the experience enough to want to play again at the next meeting.

So, having read some other posts on the forum, would it be correct to assume that-

If the cavalry pass the test to charge the infantry, the infantry then test to stand and fire.

The cavalry then move to the range of the stand and fire result and take fire.

In our situation, the target infantry had units on either flank that would then be able to fire during the fire phase of the turn.

Hopefully that would be a reasonable way to perform charges and allow any supporting units to give fire as well during the turn, how do others play this situation?

I play Charges in much the same way as you have described in your second post.

From your initial post though, it’s my reading that only the battalion being charged may give Incoming Fire against the charging Horse. Your supporting battalions of Foot may fire at the supporting Squadrons of Horse (arc of fire allowing) in the shooting phase, hopefully forcing an immediate Morale Test, a potential withdrawal and fewer bonuses to any further Morale Test required by the charging Horse.

I hope that made sense.

Only the charged foot get to issue fire during this phase of the turn as only the charging horse sqdn and defending foot battalion are active. If after the horse sqdn takes casualties from fire and fails morale causing it to stop short, then the additional foot units may shoot at that unit in the shooting phase. If they pass then they go in and a melee is fought.

In the inital bound of the melee only the single horse sqdn and foot battalion fight. After the first bound, if there are additional horse sqdns that meet the requirements on pg 92, one sqdn may join. If combat goes to a third bound then an additional sqdn may join. Foot do not get to reinforce melee vs horse if there was a supporting battalion in range.

Regardless of how many sqdns are involved in the melee, once the principle sqdn is destroyed combat is over. All sqdns will then follow the results of the lost close combat morale test taken against the lowest morale sqdn left, pg 93.

Remember also that morale grade plays a part in how long a close combat will last. Raw units that lose 1 bound of combat, Drilled units that lose 2 bounds, etc have lost the melee and check morale for losing close combat.
"Is that your opinion or the game masters ruling?"
Top

Thanks for your input Flick40.

Before I go any further. What exactly is a bound? I thought that it was just a consistent misspelling of ‘round’. Is there a difference?
Top

Bound or round of combat, they're interchangeable and mean the same to me.

"Is that your opinion or the game masters ruling?"
Top

Thanks for that. Bounds and rounds are the same thing then.

If the result of a melee is that the opponents fight another round of combat, do they do so immediately or in the following round? I assume that it means the latter but confirmation would be good.

Secondly, if melee or shooting ends with the total wipeout and removal from the table of the first squadron, how does a supporting(not reinforcing) squadron react? I can’t find anything but it seems odd that it would have no impact.
Top

Turns have phases, the close combat phase has rounds or bounds

If the result of a melee is that the opponents fight another round of combat, do they do so immediately or in the following round? I assume that it means the latter but confirmation would be good.

Melee is fought in the same turns combat phase until there is a winner. See pg 90 introductory paragraph and 91 close combat process

Secondly, if melee or shooting ends with the total wiped out and removal from the table of the first squadron, how does a supporting(not reinforcing) squadron react? I can’t find anything but it seems odd that it would have no impact.

A sqdn wiped out by shooting prior to contact has no affect upon supporting sqdns as they are not involved at this point. In Melee if any sqdns joined combat and the principle unit is wiped out then the supporting sqdns check morale for losing close combat. Pg 93
Last edited by flick40 on Tue Oct 15, 2019 5:44 pm, edited 1 time in total.
"Is that your opinion or the game masters ruling?"
Top

Sorry to keep going on but,

Two Squadrons of Horse are in melee combat(A and B). B Squadron is being supported by allied Squadron C.

The initial combat is a draw and both units are required to fight another bound/round of combat(in the same turn). Squadron C freely moves to reinforce Squadron B but Squadron B is wiped out by some extremely impressive Dice rolling in the second bound/Round by Squadron A.

I totally understand that Squadron C is forced to take a Morale Test as if it had lost the actual combat.

If, instead of reinforcing, Squadron C had remained in a Supporting role, would they be required to take a Morale Test? This is where my main confusion lies.

If, instead of reinforcing, Squadron C had remained in a Supporting role, would they be required to take a Morale Test?

No. They are only subject to a morale test if they were involved in the melee. However if there were a breakthrough then they would need to test for being charged. Also they are not in a supporting role if they are not in the melee. They provide no morale benefit to sqdn B. See pg 104 for Support definitions.
"Is that your opinion or the game masters ruling?"
Top

Thanks for all the responses, it seems there are a few interpretations of the charge rules.

Some interesting follow up questions as well, I will need to play through the rules again soon.

Why is squadron C not in a Supporting Role? Are you confusing Supporting and Reinforcing in your last reply?

Although not the best laid out question, please regard Squadron B and C as a two squadron Brigade of Horse.
Top

Without seeing the situation several assumptions had to be made. What were the order allowances, did the 2nd sqdn get a movement order, did they not, did they take fire that reduced them below the required level of casualties to provide support, etc? In most cases when a sqdn charges it moves well away from any support range (6") it had with other sqdns in its own brigade. A general question was asked so I gave the best information based on my understanding of the situation. Not anyone’s fault just the way it is in these forums.

Simon, I'm not sure that there is a difference of interpretation of the charge rules. They are pretty straight forward, what causes problems/confusion is the situations in which they are applied.

As long as you are playing in the spirit of the rules I’m sure what you do will be fine. Fun is the name of the game 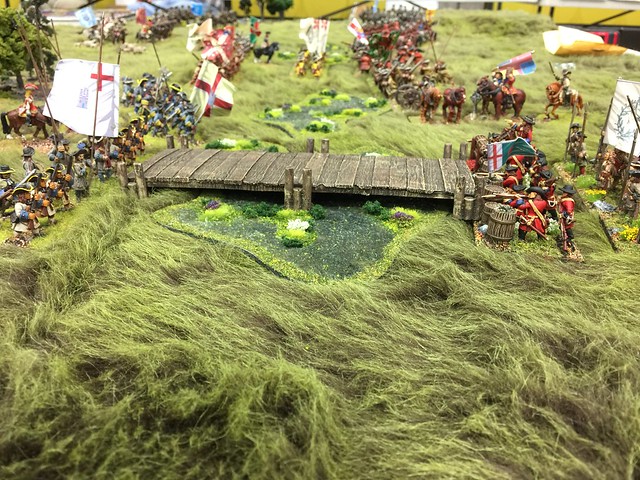 "Is that your opinion or the game masters ruling?"
Top

Btw, your photograph is excellent. Really nice set up. I am so jealous.

We are playing WoTK using 10mm Pendraken and refought the Break of Dromore a couple of weeks ago. The next LOA club battle is going to be a ‘what if’ scenario. The Battle of Moyry Pass will be representing what might have happened if King James had not listened to Lauzun and had elected to make a stand against King William at the ‘Gap of the North’.

Simultaneously happening(although on a different game night), the Duke of Schomberg will be leading a flanking army comprised of Williamite Irish and his own Huguenots around the western slopes of Slieve Gullion. At the same time, Lord Galmoy will be attempting a similar manoeuvre on behalf of King James and there will be a meeting engagement outside the village of Mullaghbane.

Return to “Beneath the Lily Banners”