Conflict between the Swedes and their various neighbours between 1670s and 1721. Including topics on Danes, Saxons, Saxon-Polish, Russians and anyone else the boys in blue were mixing it with!
Post Reply
9 posts • Page 1 of 1

From previous threads it appears that what used to be referred to as the old Karoliner uniform coat (no collar, large cuffs, vertical pockets and no turnbacks) was never introduced. Hoglund further thinks that in the 1690s the indelta regiments wore coats of the same cut as the Guards.

We all know what the classic Karoliner coat (sometimes called the younger Karoliner) was supposed to look like (collar, small cuffs and turnbacks). I've seen various contentions as to when this was adopted or implemented,ranging from before 1706 to after 1709.

I have several questions.

When was the classic model adopted, or was it essentially what was worn throughout the war? If not, did it differ significantly from what was worn before and in what respects?

When did the coats begin to be turned back? Was there ever an official regulation on this? I've been told that the coats were first turned back in Poland in 1706. Does anyone know of the basis for this assertion?

Waiting especially for your input, Tacitus.

Thanks for any replies,

In December 1706 Charles XII wrote a letter to Stockholm with instructions regarding the uniforms for the new recruits which would arrive to the main army the following spring. He instructed that the lower part of the coat was to be wider with folds in the sides and back, and that there would be no buttons below the waist. The amount of cloth needed to manufacture a coat thus increased from 4½ elle to 5½ elle.

This letter has been interpreted by many as the introduction of an entirely new uniform model which then was to be in use for the remainder of the war (i.e. the Younger Karoliner Uniform). Possibly the entire Swedish main army was equipped with these new uniforms during their stay in Saxony 1706-1707 (by courtesy of the Saxon tax payers), although the older uniforms might have remained in use by some regiments until the battle of Poltava 1709. The restored regiments would then definitely have been issued the new model, even though some older regiments which had stayed at home might still have used older uniforms after 1709.

But that leads to the question of how the uniforms looked like before December 1706. A uniform coat preserved in the Army Museum has generally been regarded to be the prototype for that uniform which was presumed to have been used during the period 1687-1706 (i.e. the Older Karoliner Uniform). The starting year of 1687 is based on a letter from that year to the colonel of Älvsborg Regiment in which the king declares that henceforth all regiments were to have blue coats. 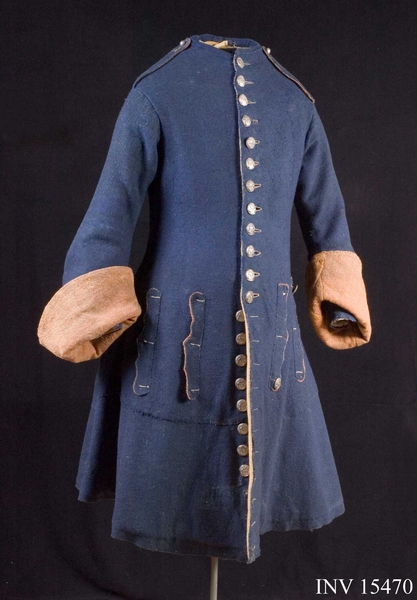 The main differences from this so called Older Karoliner Uniform (shown above) and the classic younger uniform are the absence of a collar, large cuffs, buttons along the whole front, double vertical pocket flaps and no turnbacks.

However, Lars-Eric Höglund has gradually questioned the existence of this uniform. Because other than the prototype found in the Army Museum there are no hard evidence of it to be found anywhere. Höglund noted in his first book that his research contradicted the claim of the older uniform being used until 1706. It appeared to him that it ceased to be issued ca 1692. References of horizontal pocket flaps, collars and a number of buttons that resembled the younger uniform rather than the older one led him to the conclusion that the older uniform must have been in the process of evolving into the younger uniform. So he proposed the idea of an “Intermediate Karoliner Uniform” which he dated to the period of 1694-1706.

But in his second book he wrote about a revelation when he saw an illustration of Nyland Regiment’s drummers from 1696. Their uniforms obviously did not match those that were issued to them in 1696 so logically it must be the uniforms they were issued in 1688. However, these were obviously not of the Older Karoliner type either. Instead they looked just like the uniforms of the Scanian War. With this revelation Höglund began to doubt whether the “Older Karoliner Uniform” had ever been used. After all there were no hard evidence of its existence other than the one coat in the Army Museum. What he previously had thought to be references to the Older Karoliner Uniform in his research could just as well be uniforms of the Scanian War type still in use. His conclusion was that the coat in the Army museum was most likely just a rejected prototype that never made it to the army.

What this means is that the Scanian War uniforms were replaced in the 1690s by a new uniform coat which had a collar, small cuffs, horizontal pocket flaps and about the same number of buttons as the uniform from 1706. The differences between this uniform and the so called Younger Karoliner Uniform are not that great. Other than the greater width and folds in the lower button-less part of the coat, it would only be the turnbacks which could have distinguished them. But I am not aware of any source mentioning the introduction of the turnbacks. Charles XII’s instruction in December 1706 to only have buttons down to the waist could be interpreted to be the introduction. But in a portrait from the same year the king is depicted with turnbacks, with a caption explicitly saying that this was how he was dressed when he was on campaign in 1700. Note the buttons below the waist. And I have also seen a photo of the “Older Karoliner Uniform” prototype arranged with turnbacks, so evidently even that uniform could have been worn in such a way if that was desired.
Top

Tacitus: Have you ever seen this painting of the Crossing of the Duna in 1701?

Unfortunately, I could not paste the picture here using this computer. I have never seen it before, but I appears that it might have been done shortly after the event.

Interesting notes: It depicts the Drabants mostly in tricornes with turned back coats in a lighter shade of blue than the infantry. In the background to the left there is a cavalry figure in breastplate and kyller, which might be intended to depict the Life Regiment of Horse. The infantry coats have buttons down the front and the front skirts are flipped back to show the lining but are not complete turnbacks. One can't see the collars since they wear cloaks. The cuffs must be small since they are covered by gauntlets. They were the karpus.

Do you think the painting contemporary or know anything about it.?

Yes, I am familiar with the painting although I do not know when it was painted. I am not sure if anyone does. The artist, Johan Henrik Schildt, lived 1678-1732. According to the tradition in the Horn family, the painting along with a similar one depicting the battle of Narva was commisioned by Charles XII as a gift to Arvid Horn, the commander of the Drabant Corps who distinguished himself in those battles. 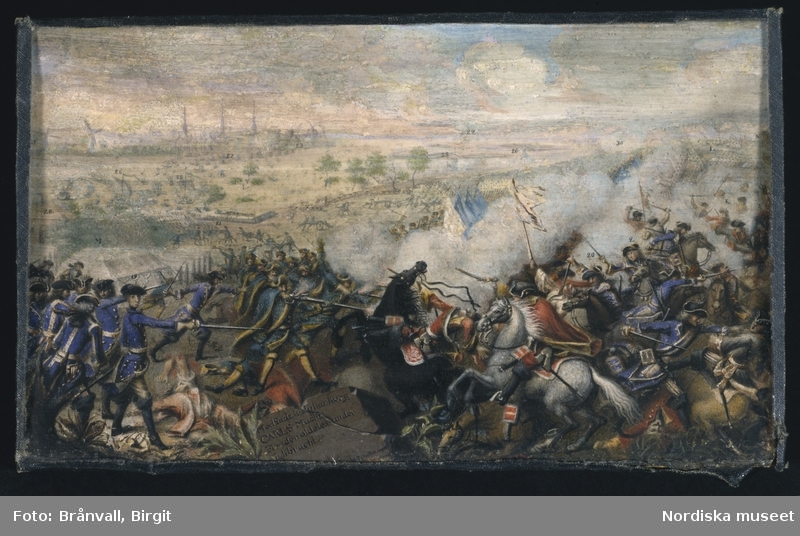 The painting has had a great influence in uniformology since it represent the most clear depiction of the karpus.

There is also a less known anonymous painting in the city museum of Tallin depicting the battle of Narva:

This painting also depicts soldiers with tricornes and turnbacks. But I do not know when the painting was made and battle paintings generally do not have a very good track record. They frequently illustrate soldiers with more modern uniforms so the date of the painting is essential.

According to historian Erik Bellander two other battle paintings of Narva, made by Daniel Stawert and Johan Lithén not long after the battle, give a more irregular appearance of the uniforms. The former seems to not depict any turnbacks but have hats that come close to look like tricornes. The latter on the other hand have turnbacks on the uniforms but many different transitional shapes of the hats. Worth mentioning is also that the latter painter (Lithén) actually was present with the army in Livonia while Stawert was based in Stockholm.

I have myself tried to study Stawert's paintings (which can be found in Drottningholm Castle), but they are hanged in a badly lit room and the Narva painting was hanged quite high. In any case, the details were very small and open for interpretation. The absence of visible turnbacks could perhaps be explained by these being to small details for him to bother with painting them.
Last edited by Tacitus on Mon Dec 08, 2014 9:21 pm, edited 2 times in total.
Top

I think the existence of the prototype uniform has been a red herring which
has misled the historians into thinking of two distinct Karoliner uniforms
separated by the year 1706, rather than having a single Karoliner Uniform
with slightly different variations during the course of the war and between
regiments.

When this thread started I had actually not picked up the piece of
information in my memory about no buttons below the waist after 1706. I
discovered this when I checked my books and then went on to examine the
1706 painting of Charles XII in 1700. However, I have now also checked
the surviving uniform worn by Charles XII when he was killed 1718 and it
also has buttons below the waist:

The uniform is the same as in the painting so it would seem that the
December 1706 letter did not bring in permanent change.

Furthermore, there is another surviving uniform from a 19 year old
lieutenant who was killed in the same trenches as the king just a day
earlier: 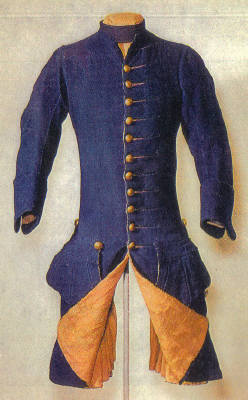 This uniform is peculiar in that it did not have a collar, which Charles XII's uniforms had.
Top

Well this website by Hans Hogman has a list of what it says are dates when the standard uniform was introduced in each regiment (eg 1691 for the Upplands regiment).

Regarding the question of whether Scanian war uniforms might still have been in use. Well there was a uniform regulation in 1683 (this was before the 1687 regulation theoretically introducing bluecoats), explained here and only a few regiments are wearing blue coats.
Top
Post Reply
9 posts • Page 1 of 1