I have had a crack at modifying Donnybrook to fit the period Donnybrook+200 if you like... I shall return with what we modified and how it has worked, once we have tried them. 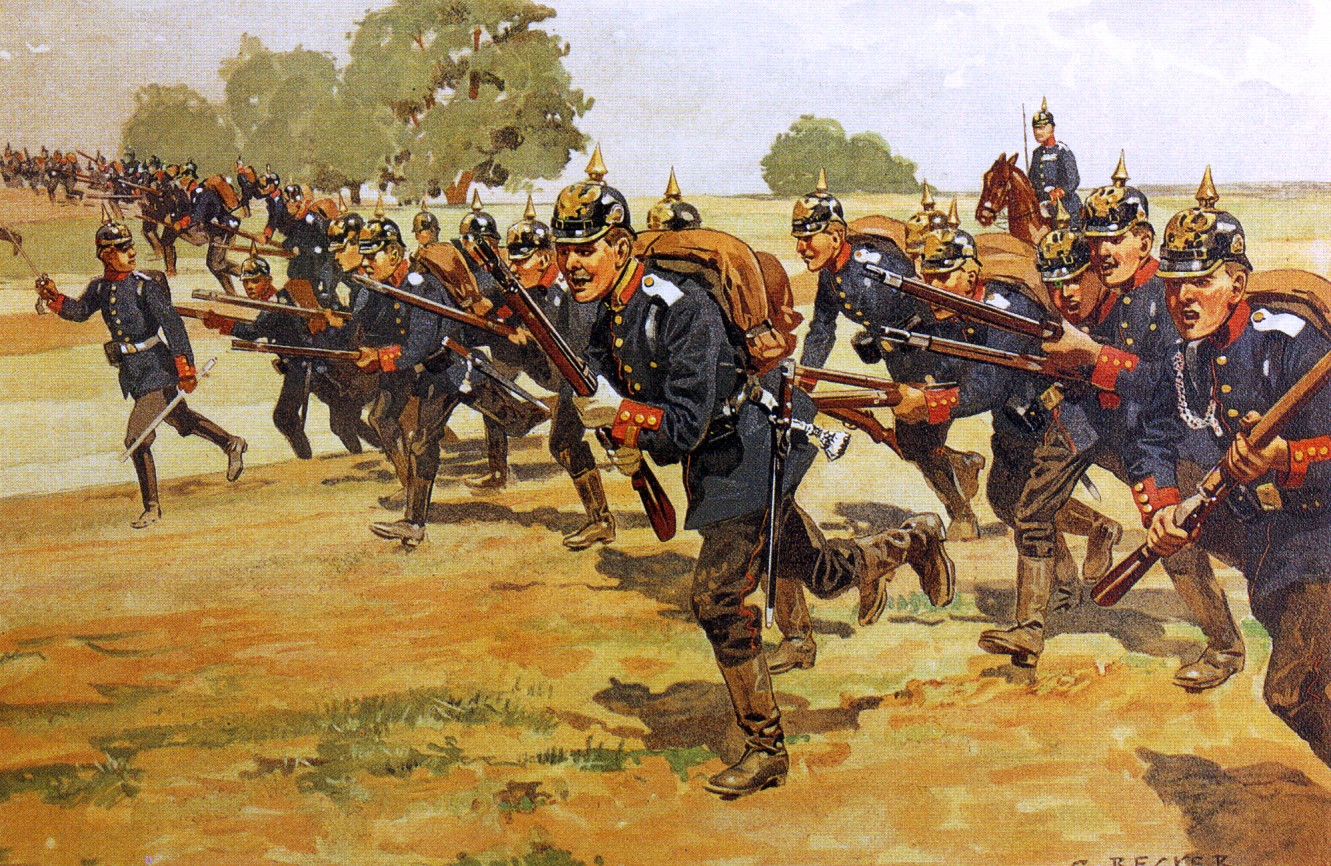 I had a crack at some unit cards for Donnybrook 1895 (it should perhaps be Der Donnybrook 1895...) Basic British and German units as well as Sergeants, Corporals, senior NCOs and Officers.


I have tried to give the two armies some interesting differentiation without breaking the game. My knowledge of the period tactics is a bit sketchy I have to admit. I have included the WW1 (mythical?) Mad Minute fire for the British regulars which is perhaps anachronistic, but it sort of suits the colonial style of the British Army of the period. The Germans were very much into their fire and movement tactics ( a newish M.O.) so that is what I have tried to encourage with the Prussian Discipline schtick.


My fear of how bloody the games could be with no reload card (except if you have blasted away all your ammo using Mad Minute fire,) led me to include the (wiley) corporal card. His superior fieldcraft (an old india hand maybe?) allows the unit to ignore a casualty but hunkers down for a turn. The effect will be, I hope, that a veteran squad will move more slowly overall because they are using every fold in the terrain following the example of Corp.


I am now putting together some ideas for irregulars and civilians that will hopefully keep games towards "The Boys Own" end of the spectrum rather than the horrible modern terror and reprisal end.


Happy to get any comments or feedback of course..
Top

I tend to use more terrain in modern-ish settings so line of sight is somewhat limited and troops benefit from cover saves and this helps offset the lack of a Reload card. You can also add a 'Go to Ground' rule to allow models in the open who do not move to get a 6+ cover save (not stacking with other cover saves).

I look forward to hearing how you get on...
Clarence
http://www.quindiastudios.blogspot.com

In the 1840s a wave of revolutions and movements for democracy swept across Europe. The reactionary nobility of the German states came within an ace of having to concede their grip on power. Just enough of the ruling class held their nerve however and the hopes of the revolutionaries were dashed. There were few places in Europe where the fleeing ringleaders of the reform movements were safe from vengeful rulers but one of those places was Heligoland. The British Government adopted a diffident attitude to foreign powers’ domestic problems, allowing refuge in the small corner of Germany within the British Empire, whilst repressing home-grown democracy campaigners.

Fifty years later the disciples and descendants of the revolutionaries from the 1840s are an integral part of the Heligoland population. Their influence has added a strain of libertarian attitude to the stubborn islander mentality of the people. However at the extremist fringes of dissenting opinion are a small number of people prepared to use violence to further their aims. These groups include a variety of anarchists, communards and others who form a loose alliance commonly called “The Daughters of Anarchy”. The largest single group within the alliance is the activist wing of the Heligoland Suffragette movement. The influx of armed men into the islands of the two patriarchal Powers has led to a violent reaction by the extremists in the alliance and the threat of hurled bombs is very much a reality.

The authorities and military commands of both side are at a loss as to how to deal with this threat. They see a dangerous anarchist group taking advantage of the situation with demands and aspirations that they cannot even contemplate at the present time. The fact that most of the outrages are being carried out by women is also very disturbing and the military are under strict instructions to proceed with care. Any officer ordering troops to fire on civilians who turn out to be unarmed will be very much for the high-jump! (The publicity from any such incident could effectively lose a side all international support.)

The Daughters of Anarchy Special Operations cadres are usually quite small (often 4 people.) They are usually a mix of male and female activists and are very highly motivated (D10 standard.) Although well supplied with weapons by their supporters, the members are not well practised with firearms (down 1 dice type,) so frequently they will go to bombs and pistols as their weapons of choice. A preferred method of operations is to blend in with civilian population to gain surprise and to get away after an attack.

I have done some faction cards for the Daughters of Anarchy (here). Some inspiration from the Covenanters faction in the Donnybrook rule book but I think they might be a challenge for regular military to tackle...
Top

Steadily painting up the combatants for the two sides but I snuck in a couple of command characters (who might bear a resemblance to friends I game with*.)

First is Sir Leslie A. Rumbol-Smythe, Archie to his friends. These two will have some backstory including previous encounters in other parts of the world. Archie is rumoured to be a handy chap in the sort of situations where Her Majesty's Government cannot get directly involved. The Baron is a fanatical patriot and has used his family fortune to support various schemes (dastardly ones natuarally) that he sees as advancing the cause of Greater Germany.

No images exist at the moment for the notorious Anarchist leader known as Adamos de la Hay...

I cannot for the life of me remember where the British office figure came from, maybe London War Room's old range of figures for battles on Mars. The Baron is a Westwind Miniatures chap from a pack called German Archaologists (I'm not sure how you use a sabre in a dig but there you go.)

Our first try out of the amended Donnybrook rules on Sunday. report here The rules worked well despite me forgetting the "gone to ground" idea. We discussed slight changes to the saving throws for future games , incorporating it however. The machine gun fire was done using a template for a beaten zone and that stopped it being too overpowered but still with the potential for punishing clumped together units.

The only raw unit on the table was quite effective once lurking in cover and the four figure veteran units not fatally brittle, which was interesting.
Top

Adam, do youknow there is a facebook group called "Donnybrook the skirmish game" It would be great fun if you could join us there
Top

Renooij wrote:Adam, do youknow there is a facebook group called "Donnybrook the skirmish game" It would be great fun if you could join us there

Didn’t know that, I’ll have to check it out.
Top

This is fantastic. I'm really liking how you are developing this for your campaign.

After the first game we went back to the history books to look again at the tactics of the period. I want a distinctive feel for the games in this period in the same way that Donnybrook does for the late 17th Century. Anyway, my chuntering on about the ideas for changing the rules for the way officers work is here click here There are also some photos of figures painted so far.

The draft rule additions are here: PDF of 1895 command rules Well done on this Adam. I know Mr Harrison is working on Donnybrook right now with some new ideas we are bringing to the users. The good news is that we are finished The War of Three Kings and I am in dialogue with the printers now.
"If you think you can, or if you think you can't, you are probably right"