OOB for French Forces at Landen/Neerwinden?

A section devoted to questions and answers for this period.
Post Reply
45 posts

OOB for French Forces at Landen/Neerwinden?

Mark Allen lists the following French Infantry Regiments for the Landen (Neerwinden) campaign, and I just wondered what people thought of this?

In my attempts at creating some brigades for my BtLB forces, I'd like to try and keep 'accurate' (maybe 6 battalions of infantry for now.) I've already started with d'Humieres.

Google has thrown up other OOB (

though for the life of me I can’t believe I didn’t keep the reference – it was off a blog site), and it doesn’t always match with Allen’s list. I’ve only been into the period for a few weeks, and I’ve already been shown there are some discrepancies! Eg. I think Navarre’s were known to be there - or was this just at the Siege of Charleroi, but aren't shown in the Allen list! I was wondering if there are any decent sources for the battle, OOB, course of the battle etc? I’m going to have a look at the Caliver book lists in a bit, but would appreciate a heads up on good/not so good works of reference. Many thanks!!

I don't have a complete oob yet, i'm still quite new to this period too, I have seen a complete oob for the start of the 93 campaign and others have been referred to, so they do exist.

I looked at your list and put the Susane regimental numbers to it with battalions from the 93 oob.

a couple of regiments were not on the list marked ** also one Swiss regiment has the previous years name.

I would recommend the set of Susane, to stand any chance of understanding the French regiments, and these are good right up to the French revolution.

I'm sure I posted this once, but it didn't appear!
Top

I couldn't quite work out the order he has listed them, but with the susane numbers it looks like it is based on year the regiment was raised or seniority and not any original order of battle.
Top

Chiming in a bit late, though I'm afraid I do not have a full Neerwinden orbat in my saddlebags. There have been a couple of threads on the subject on this very forum before, none of them too conclusive. Beware the French OOB provided in the link below as it is downright dodgy : it omits units which were famously present at the battle and lists regiments which are known to have operated on other fronts in 1693, be that Italy or the Rhine. It also gives Boufflers as CiC instead of Luxembourg and no mention is made of any period or secondary source, which is never a good sign :

The battle of Neerwinden/Landen is not something I have looked much into, so I'm afraid I do not have anything too specific in my possession. I'm pretty sure the S.H.A.T at Vincennes (the French military archives) have something in their late C17th cartons, though. Susane does offer a few pieces of the puzzle in his individual regimental histories but they do not amount to a full orbat. For what it's worth, he explicitly states that D'Humières' two battalions were brigaded with the three battalions of the Navarre regiment, which is a start. This brigade fought on the French right at Neerwinden, and Susane also mentions that the Bourbonnais regiment fought on Navarre's right (which does not mean that Bourbonnais was brigaded with Navarre and D'Humières, see Beaurain below).

Outside of the period papers preserved in Vincennes, an interesting source is the Chevalier de Beaurain's Histoire Militaire du Duc de Luxembourg en Flandres/Histoire militaire de Flandres, which was published in 1776 and featured a full account of the battle along with four maps of its various stages. Beaurain (or Baurain, depending on which spelling you opt for) does not give a specific breakdown of regiments for each brigade, but his maps give a good sense of the way Luxembourg's army was arrayed for battle : 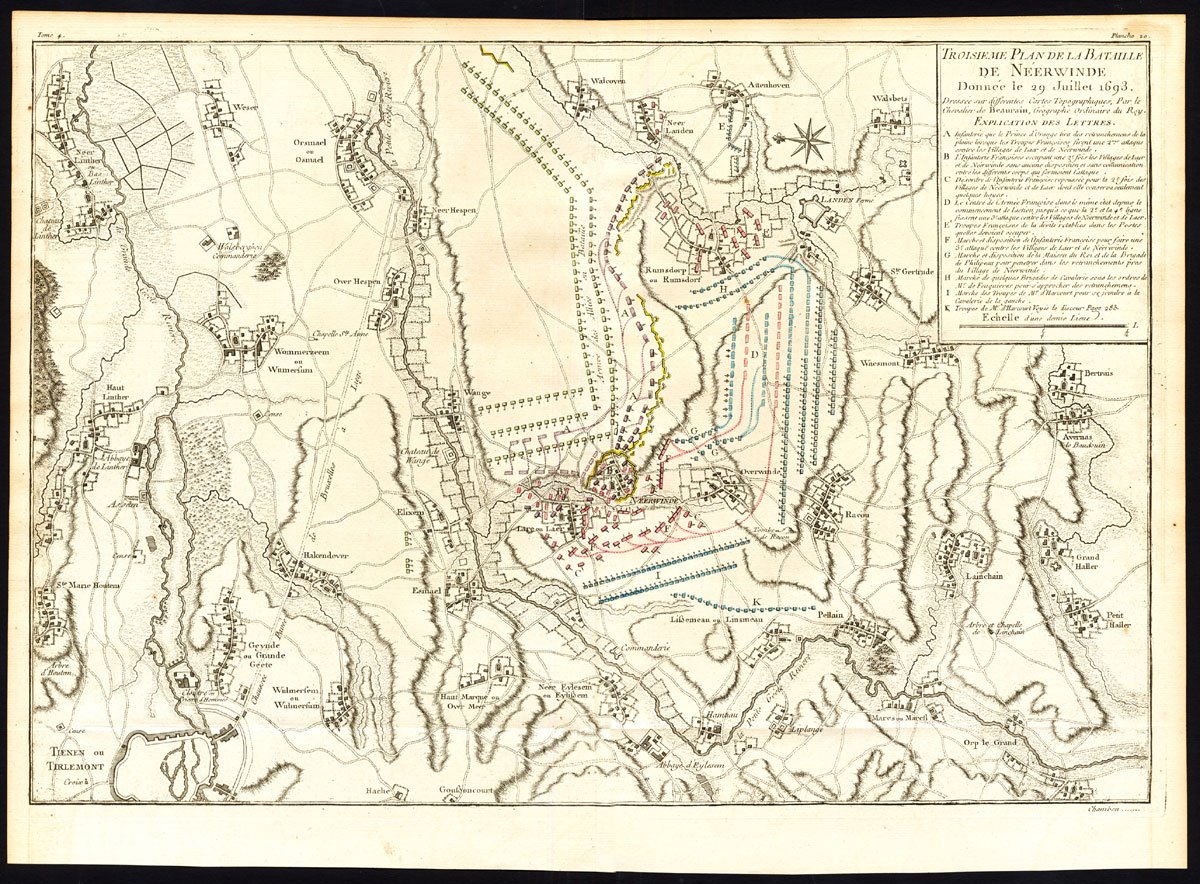 Beaurain's multi-volume history of Luxembourg's campaigns in Flanders can easily be found on the net and downloaded for free (though these editions don't usually include the maps) :

All of Beaurain's volumes can be found on Google Books by following the links at the bottom of the pages above. The books are all in French, though - and late C18th French to boot. To make your life a bit easier, here's a recap of Beaurain's French foot deployment at Neerwinden :

* Brigade de Navarre (including d'Humières according to Susane, so 5 batts)
* Brigade de Bourbonnais
* Brigade de Lyonnais
* Brigade d'Anjou
* Brigade d'Artois
* The regiments of Maulévrier, Sancerre and Beugey which do not appear to have been brigaded. Lyonnais fought on the far right of the line and attempted to storm Neerlanden but the assault was disrupted by the presence of several French dragoon regiments ahead of the infantry.

* 'The remaining 21 infantry battalions', and that's as specific as Beaurain gets !

Susane provides a bit of additional info regarding the foreign regiments : he states Stuppa and Sürbeck (formerly Jeune-Stuppa) were brigaded together, which means the 8-battalion brigade probably belonged to the fourth line in the French center (which accounts for at least some of the '21 remaining battalions'). On the left, it is likely that the Salis (a.k.a jeune-Salis) and Courten regiments were brigaded with other fellow Swiss units, which would place them either in the Reynold or Greder Suisse brigade.

Hope this helps a bit, even if it's not as detailed as I'd like it to be. I'll look around to see if I can come up with more.
One morning I shot an elephant in my pajamas. How he got into my pajamas I'll never know.
Top

Excellent post again Arthur, as a note, the gallica editions (The French National Library) of de Beaurain's work has the maps in it:

Good catch, Motorway . I already had the GoogleBooks version, so didn't even think of having a look at Gallica - which I should do more often.
One morning I shot an elephant in my pajamas. How he got into my pajamas I'll never know.
Top

Any info on the Mason du Roi, the cavalry or dragoons?

The Maison du Roi fought in the first line of the French center. The Gendarmerie de France, however, was not present at Neerwinden, being in Italy at the time.

Re the dragoon regiments, six of them are known to have been present at Neerwinden. Colonel-Général was on the left flank and Monsieur de Saint-Mars, its mestre de camp, was killed leading his regiment in action. On the far right of the French line, a four-regiment brigade under Monsieur de Caylus was tasked with assaulting Neerlanden. The units which composed this brigade were Caylus, Firmacon, Asfeld and Asfeld-Etranger. Beaurain gives them a combined strength of 16 squadrons, which is a bit odd as dragoon regiments only fielded three squadrons during the Nine years War. But then again all other sources also put that brigade at 16 squadrons and all mention four regiments only.

The Sailly dragoon regiment is also supposed to have fought at Neerwinden but Beaurain does not mention it in his account. I checked Henri Choppin's Histoire générale des dragons for more details but Choppin is remarkably laconic when it comes to Neerwinden : he only devotes a ten-line paragraph to the battle and what little he says doesn't break any new ground compared to Beaurain.

There's precious little about the distribution of line cavalry regiments in Luxembourg's various brigades. The left wing had 55 squadrons, 51 of them being held in reserve in the second line under the Duc de Joyeuse. The cavalry provided the first, third, fourth, fifth, sixth, seventh and eighth lines of the French center with a total of 107 squadrons, not including the Maison du Roi in the first line.
One morning I shot an elephant in my pajamas. How he got into my pajamas I'll never know.
Top

I have it as a nice word table but it loses format when pasted here, I have included the Susane references in brackets (I wish everyone did this) this is all work in progress and I still have to compare to the OOB after Neerwinden.
unusually the brigadiers are named, this a lot more useful than the senior regiment name.
spellings are dependent on the document and my reading the text.

all listed from right to left, any corrections welcome.

There is an OOB for May which includes Boufflers army before they split up which includes the gendarmerie, the mousquetaires and the rest of the carabiniers who all went south with the Dauphin/boufflers
Last edited by Graf Bretlach on Tue Aug 20, 2013 1:36 pm, edited 3 times in total.
Top

Thanks for the amazing information so far everybody - what I love about this forum so far is that just one query, from anybody, can stir so much interest and debate! Fantastic!

I'll try and digest all the information posted so far!! Back again soon, I hope... I'm slowly working my way through painting d'Humieres regiment!

I would like to thank everyone for all the info they have added to this topic and I hope Barry and Charles are taking notes for our refight in November?

A refight in November

I hope to see a big section in the Gallery with lots of pictures and a AAR. Neerwinden is to the LoA what Waterloo is to the Napoleonic period.

Wow !
What a thread ! Thank you guys for such in depth analysis.

@ Captain of Dragoons
Do you intend to do whole battle ? With every battalion represented on table ? What scale will you use ?
Maciek

I notice Quincy also has the Cravattes du Roy [108] only 2 escadrons.

does anyone have the details for the regiments in the crease of the book, still can't make them out?


I am now looking at the other 1693 theatres, especially Marsaglia, has anyone studied the French under Catinat, trying to avoid the Clark/Clare problems, I have an oob from Nec pluribus Impar and one in Quincy, struggling to match the two, and some regiments not identified, anyone help?