A section devoted to questions and answers for this period.
Post Reply
39 posts

What figures would you like added to the North Star catalogue? I would like to see armoured Dutch and Spanish pikemen included and Cuirassiers with Zischagg helmet not to mention mounted commanders.
Top

More poses is the first obvious answer, including figures in various stages of loading the musket to complement the current figures firing and at the ready.

Marching or standing musketeers would also be nice.

When did grenadiers and fusiliers start to wear unique caps?
Top

The 1672 range has been on the back burner for a while because Steve Saleh's been busy sculpting figures for the North Star Samurai and Victorian fantasy ranges. Dunno when he will be available again to do more Louis XIV stuff and Nick Eyre's been rather evasive when asked.

* French and confederate dragoon command - already requested : Nick's been saying he'll get them done in the fullness of time but doesn't know when.

* More mounted generals and staff for both sides.

* Loading musketeers for both the French and the Confederates, along with new advancing/attacking poses for the infantry.

* Perhaps more aggressive cavalry poses as the existing ones, while very nice, are nevertheless a bit sedate.
One morning I shot an elephant in my pajamas. How he got into my pajamas I'll never know.
Top

I'm working on some dollies sketches for 1660-1680 infantry like armoured pikemen and musketeers in various poses to see if I can sculpt compatible figures with NS 1672 range. More advancing/attacking with bayonets, officers/command, grenadiers, Swedes with karpus and sappers & miners(?) sketches latter this week.

I love your ideas. I am a big fan of figures standing casually. They seem to be the easiest to paint. This is a very under rated period, say 1665-1685.

The Scanian War book mentions karpus worn by Swedes, but is not specific. The Scanian War should be a good period for wargaming because of the small size of the battles
Top

Most examples of karpus I've seen are of 1690-1700's representations but they were also used earlier. The uniforms are so generic that the only thing really distinctive to make a unit look Swedish is to include some figures with that item. A couple of musketeer figures with boar spear (schweinfeder) would also be nice. The Brandenburg Army used them, and others as well.

In his list of Swedish regiments Hoglund mentions some wearing karpus, although uniform changes were frequent so these may have been an option.

The eastern Eurpoean discussion could become something of a distraction. Most Swedes, Prussians, and Saxons could use normal western European figures.
Top

Thanks for that info. My copy of Lars-Eric Höglund's "Scanian War 1675 - 79, Colours and Uniforms" arrived. Nice book with a few colour pages with drawings of flags and uniforms. I'll digest it tonight to see if there are more peculiar Swedish items.
Top

Looks like the karpus was a common item worn by infantry and cavalry rank and file. Here's a good example of one in the Army Museum in Stockholm: 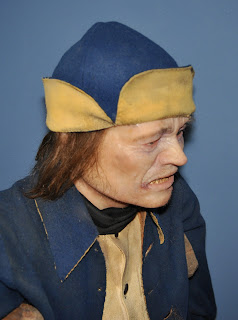 Just a note that Warlord Games sells a pack of swinefeathers:

And that Foundry in their TYW range sells two packs of musketeers in "Swedish coat" with rest that can probably be turned into swinefeathers fairly easily.

The Warlord schweinfeders look great. Thanks. Dan Schorr sent me some pics of musketeers that have been very useful. Here are some updated sketches I've been working on.

These images from the NYPL show Dutch musketeers in helmet & cassock, with musket rest. They are dated 1670. If this is correct the equipment seems old fashioned.