by Scruff
Has anyone grabbed the Infantry and Cavlary boxes from Wargames Factory WSS range to check them out yet?

What do you think of them and what nations would the Infantry in particular fit well into? 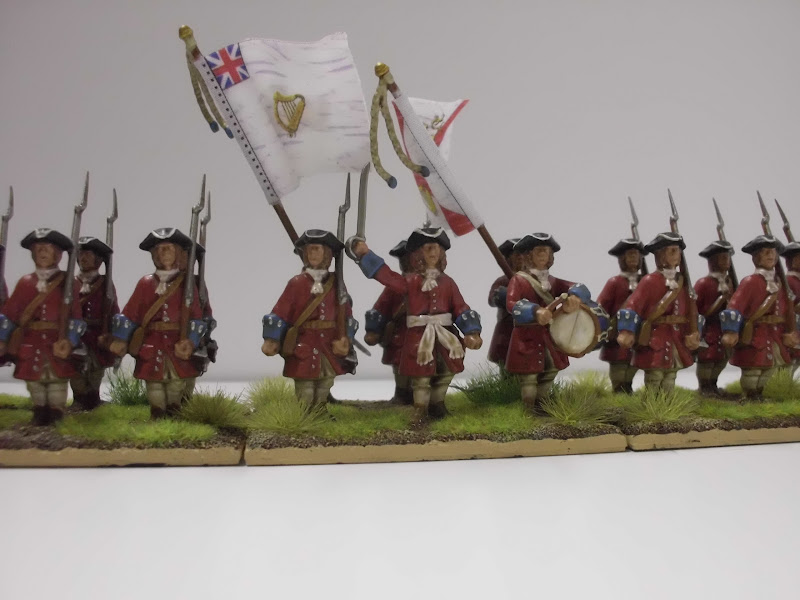 they are not Warfare Miniatures, Front Rank, or Foundry in quality, but then neither is the price
i intend to buy officers/artillery/specials in metal, but plastic for the rank and file

it takes some time tot prep/glue them, and i have not yet dared too much conversions, but i will try to get bolder on that

by EvilGinger
I have both & I think they are perfectly good the only niggles I have are the fixed socket bayonets , when I want to use them for the 1680 to 1700 when bayonets were more likely to be plug or ring & so only fixed when needed. I use them for rank and file mostly in non personality units for my Sharp Practice Variant. Personality units are mostly in metal

The cavalry are better than the infantry & they are I feel less specifically post 1700. Size wise both are quite comparable with the Warlord range for TYW & ECW so head swaps and weapon swaps are easy all you need is a sharp knife for the latter, though in my case being trained in dealing with battlefield wounds is a great advantage as well. I have even used the odd spare head from my Victrix 1804-7 - heads are easiest but some of the Victrix tricorns are so battered & misshapen they could be the the informal ones of a century earlier. Victrix also do some very characterful faces.

As far as size goes they fit with metal ranges from Essex Warfare and Dixon to my certain knowledge but I would only use Front rank officers in directly mixed units and then with care as some are bigger than others.

I hope that helps I would post some examples but my poor Camera is on its way to the mender at the moment.

I hope that helps

by Scruff
Thanks guys, at 14.85 pounds, less the nice xmas discount, ill pick a few up and see how we go

by Redmist1122
Alex,
What head variations come with the infantry/foot boxes? I bought one of the cav and that came with a variety of heads and torsos.

Redmist1122 wrote:Alex,
What head variations come with the infantry/foot boxes? I bought one of the cav and that came with a variety of heads and torsos.

by Redmist1122
Thank you! Like the mix of head options...but not completly sold on the infantry - not much in a way of different poses. I do like the cav - finally put together a squadron of French Grenadiers a Cheval.

I was part of the "consulting team" that helped with the design of the original WF Infantry set. This set started as a "Liberty & Union League" submission and the mandate then was to create a truly "generic" set in an "old school" style for doing Grant & Young style games. Hence, the rather generic marching poses. Originally, there was much discussion about doing a follow-up set, or at least a single sprue, that contained optional leg poses to be used with the abundance of extra torsos, arms, and heads. However, these hit the market at the exact time that WF went through their "bloodletting" and management change, so the proposed additions never happened. The Cavalry set was done by new management, who put the test sprue out there for our feedback and input, but only after it had already gone to tooling. That is why there are several inaccuracies in the set and improvements that should have been made, but really couldn't because it was already in tooling.

I have since been in extensive discussion with current management and it is very likely that we will see an Artillery set, they will use feedback while still in the design process, and there may still be an opportunity to produce some "spare parts" or at least optional parts to allow a little more variety in the Infantry. The thought right now is to create artillery crew using the same format as the multi-part Infantry (split at the waist), but create at least two new leg poses that would also work for standing firing or a wider-legged advancing or standing pose, and to possibly offer the crew sprue for sale as a separate sprue (like the Persian sprue). The best thing you can do is to use WF's Forum and let them know that you really want this set and these options included. The overall concept is for all of the WF sets to have interchangeable parts to allow for the maximum degree of variety, although this will mean more assembly. They are committed to "completing" the range, but the priority they assign that set will be based on economic viability and customer demand.

by EvilGinger
Thank you Bill will go over to the wargames factory forum and make a constructive pest of myself.

Please feel free to add your thoughts to this topic thread on the Wargames Factory Forum:

I think it addresses at least most of the feedback that I have received.