I'm going to be painting up the English and Moors/Moroccans for Tangiers, using Donnybrook. What do you think the building of Tangeirs would have been?? Would some building have been European as Portugal once owned it or would it be totally African buildings, like the typical North African adobe kind?? Any ideas chaps???
Ray

Hello Ray , I do not know exactly how the builings were, but you can see and study the architecture of Ceuta and Melilla, two Spanish cities that are close to Tangiers and have some points in common with Tangiers:
- Both were taken by Portuguese or Spanish at the end of middle ages
-Churches and Cathedrals were constructed this way :
http://commons.wikimedia.org/wiki/File: ... 3%B1a..jpg

So in my opinion in Tangiers at the end of XVII Century there would be a governor villa,built in a "Iberian European" Late Renaissance fashion, Some port defenses like those in Ceuta and Melilla , defensive "Castillos" or castles, barracks, Muslim district and Christian district.
So , answering your question, i would mix both, european and north african architecture mixed. If i were you, i would check "Grand Manner" scenery and go for Spanish buildings ie. a meditherranean church, a couple of villas and some muslims adobe houses are a good starting point

and check current photos of Oran, Larache, Ceuta and Melilla for some inspiring XVII century inspiring buildings.
If you have a look at this page, you'll see some surviving North African Fortresses built by Spanish or Portuguese (Spanish controlled them from 1580-1640(1668)
http://2.0viajes.com/fortalezas-espanolas-en-africa/

I hope all of this will help you.
Cheers!
Top

Thanks chema1986, they are my feelings a bit of both!!

I also asked the question on the TMP forum, I was informed that....
"Wenceslas Hollar made a number of contemporary paintings, drawings and etchings of Tangiers that show the structures and the defences as well as some details of the garrison . The British Museum has a collection"

"The main town defences and interior buildings were of Portuguese construction. The Portuguese inhabitants were less than thrilled to be handed over to the heretical English, nearly all departed in 1665 and when thy left, many stripped their former abodes, right down to the windows and doors.
IIRC Pepys' diaries and other contemporary accounts do make some mention of shaded interior courtyards to some dwellings."

Here's one of the pictures, you can clearly see its a European City. 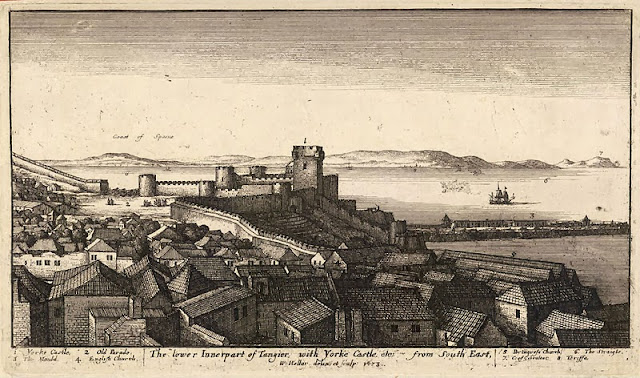 I may well have a go of building the fort below, Fort Henrietta, on the coat, that should make for a nice centre piece to a game!! 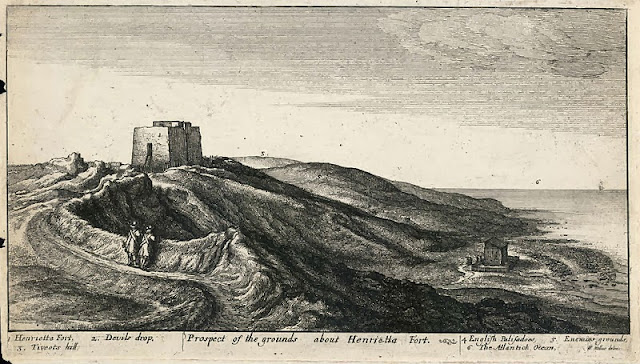 Here's a link to the other pictures in the collection.