A section devoted to questions and answers for this period.
Post Reply
22 posts

I like those guns, especially the recoil one, that I will steal!

Really inspiring, Adam - thank you. Loved the guns and the Wallachians.
Top

Finished and based a unit (2 BLB squadrons) of Timarli Sipahi, figures by Warfare Miniature. Excellent miniatures, very dynamic and easy to paint (no really!) The riders all have long firearms to attach to their backs which locate nicely with a lug to a small - in the cavalryman. I had read that there was resistance by Ottoman cavalry to firearms but this may be a Western misapprehension.

These join my other 4 squadrons which are my own castings on Warlord plastic horses. There is no real information about uniforms for this period; not in the regular/guard Kapikulu units and certainly not for the provincial Sipahi cavalry. This allows me to choose a mix of schemes, some units in similar colours some in a complete mix. This will work okay for the successor cavalry to the Sipahi once they pretty much disappear in the mid 1700s.

For the Vienna to Great Northern War period I am going to rate Sipahi as relatively competent. Maybe not as dangerous as previous times (and described as "useless against regular European troops".) However they are still great horsemen and relatively keen. No armour at this time and probably no use for the mundane tasks such as picquet duty and scouting but there are lots of other cavalry who can carry these out in an Ottoman force.
Top

Balancing up my Ottoman force required some infantry units be painted. The recent arrival of command figures from Warfare Miniatures (thanks Barry) allowed me to complete a command stand for the Bosniaks I already had. These types of soldiers, raised for a short term period during a campaign, usually had Ottoman Turk officers. I chose a figure with a swanky fur-trimmed coat worn over his shoulders and a circular breast plate. The officer figure was done with richer colours but the others on the command stand kept to the duller limited palette used on the rest of the unit. 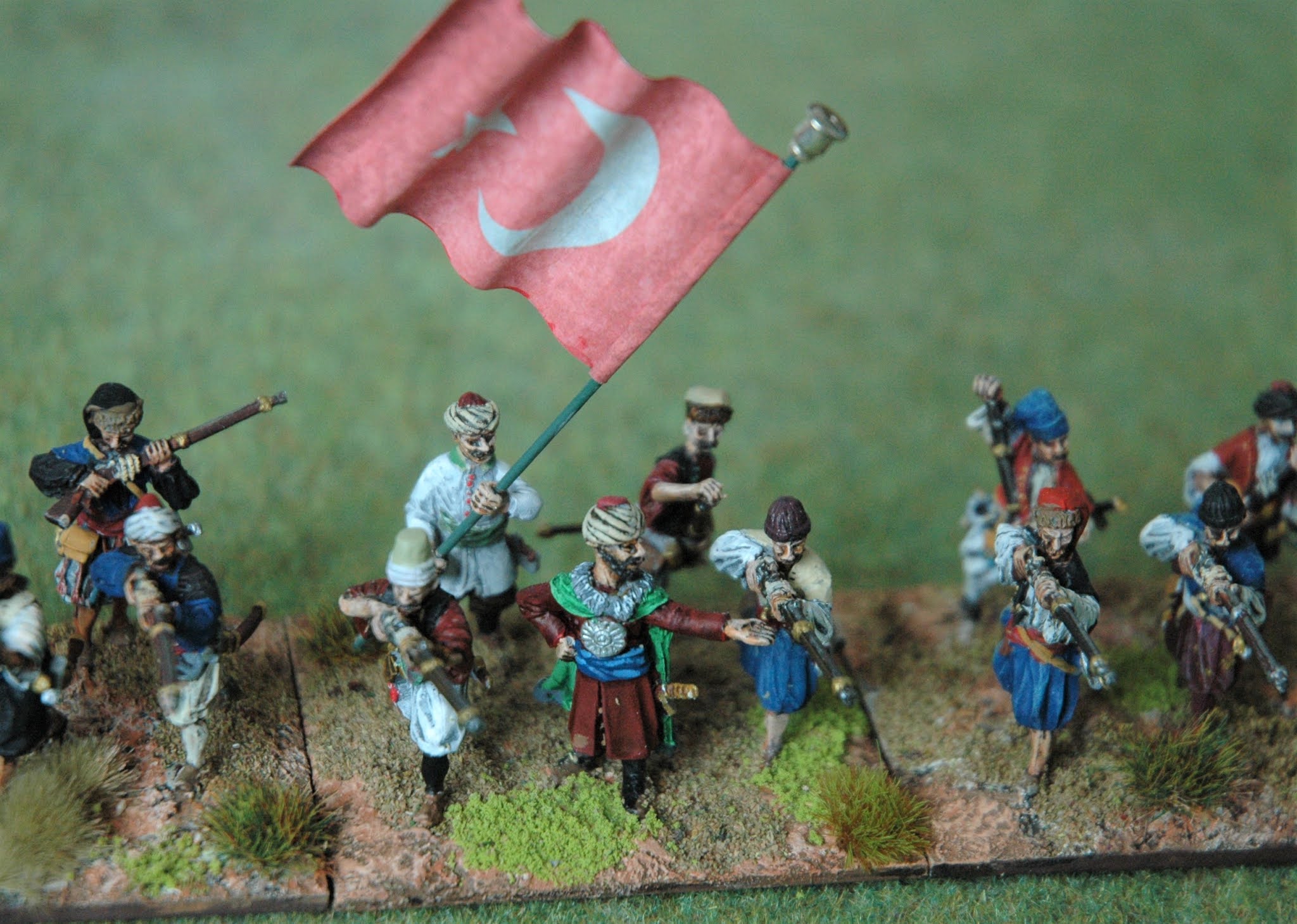 The new unit is an Orta of Azabs. These are the militia that was maintained in all the border regions of the Ottoman Empire. The quality of Azabs varied greatly depending on where they were. The better quality end of the spectrum were expected to go on campaign with the main field army although ideally they would free up regular troops from garrison duties. 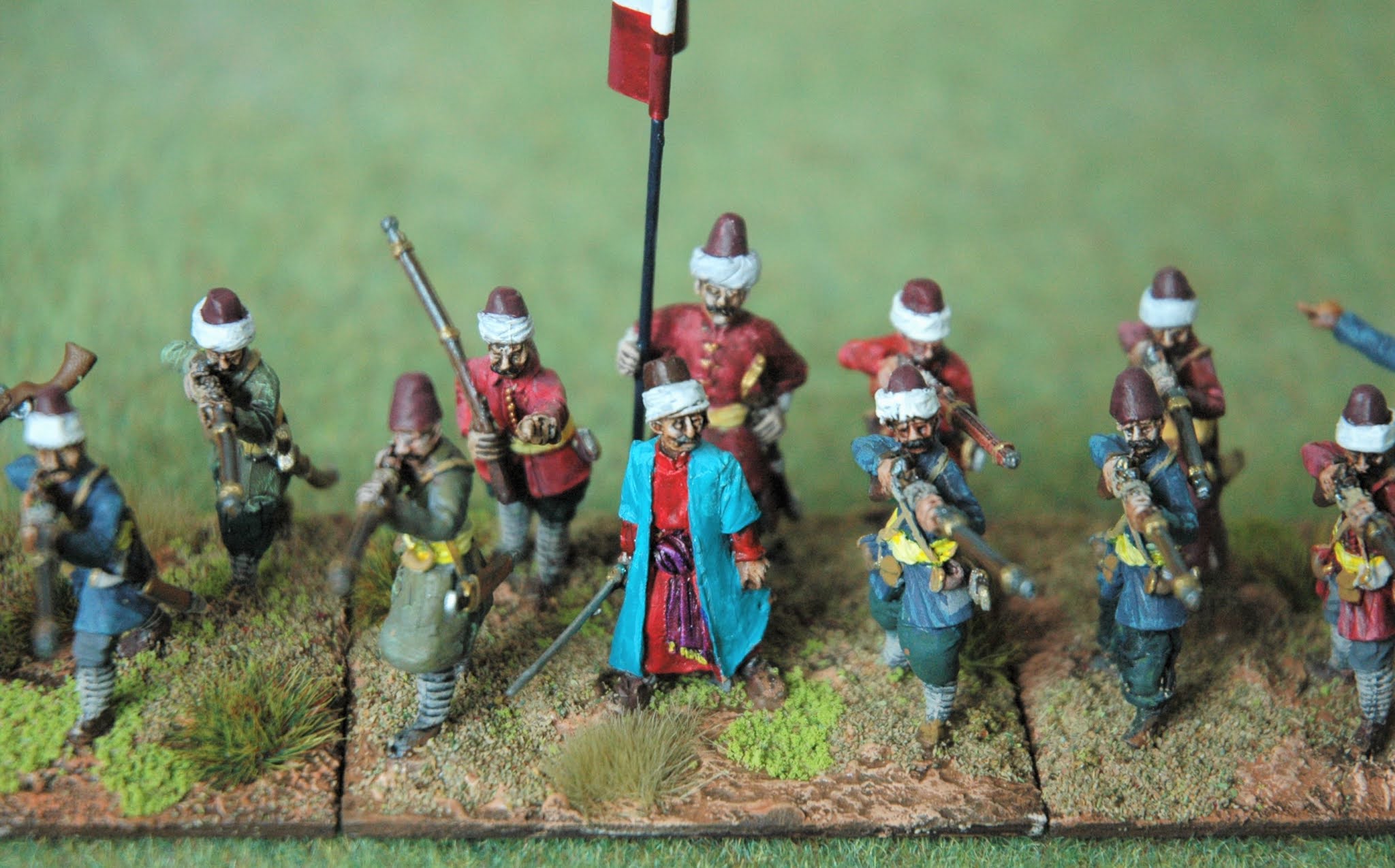 The figures for this unit are almost all conversions. I took my inspiration from the Bruno Mugnai book on the Ottoman army which has an illustration of a European Azab on one of the colour plates. Most of the figures are Warfare Miniatures Tufeckci musketeers. Always hated these (they were a freebie too, I am SO ungrateful!) Everyone seems to produce Tufeckci based on early 17th Century Azabs. My conversions are to remove all the stupid feathers from their hats and add a simple wrap or turban to most of them. All of the figures also got a longer kaftan and/or baggy trousers.

The officer is a conversion of a Brigade Games artillerist and the musician based on a Brigade Nizam-i-Cedit figure. The flag bearer is a Caliver/Minifigs model. He is a mountain of a man 6'2" to scale but then that is the sort of chap I would choose to look after the standard! The flag was another found online based on one for an Ottoman province on the Danube.

These two units epitomise the colour and variety possible in an Ottoman army of this period. I plan on completing another unit of Bosniaks and then doing some Albanians and Arnauts. The aim is to field about 50% of the infantry as non-Kapikulu types.