by kingscarbine
Does anyone have information about the Dutch cavalry of the period? I've just realised I have very little on the subject and not a single image of a Dutch cavalryman.

by Motorway
Check out the http://www.rijksmuseum.nl site, use the search function, and enter the word "seneffe" or "st denis". 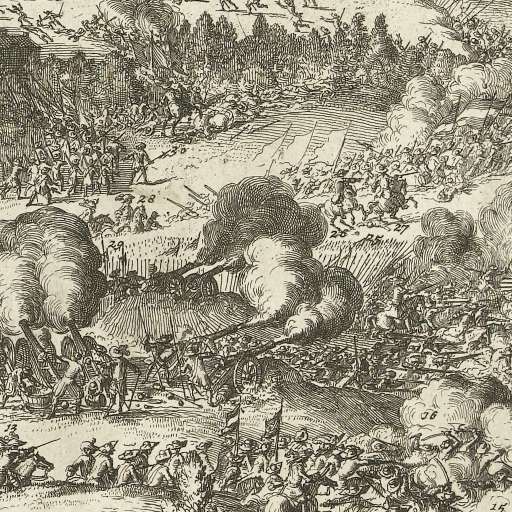 And what can we conclude or deduce from this pic then? The etching is made by Romeyn de Hooghe, around 1678 and is part of a pamphlet by an unknown writer. Pamphlets were used by all sides, translated into various languages as part of the propaganda war of that time. (For those interested, Michiel Reynders has written a great book about the million pamphlets that were published in this period called "Gedrukte Chaos", ISBN 9460032842 ).

The picture is usually shown in two parts, showing the great exploits and victory of Stadholder William III at the battle of St-Denis. Above is the right part of the picture showing some commanders on horseback with a cuirass. Note the lavish hats, the cravattes, and the plumes.

Also visible are dragoons, and it looks like most dutch horseman look unarmoured and the hat sizes vary greatly. I noticed though some helmetted and armoured cavalrymen, also dressed in cloaks. Of note is also a drummer on horseback. Dutch troops can be identified by a red/white/blue flag, which is a convention, so the flags themselves aren't representative.

If I have some more time I can dig up paylists and the like.

by chema1986
Hi ! I have found some information on this fantastic blog :

"Dutch Cavalry Regiment No.10 formed in 1672
This cavalry regiment would be Lodewijk Christiaan Graaf van Wittgenstein in 1674, possibly present at the battle of Seneffe 1674. In 1676 the colonel was Albert Ferdinand Graff van Berlo.

Uniform details & sources: Gerpines andd Wagner agree on the facing colours (red cuffs, red waistcoat, red breeches), Wagner and Belaubre say the coat was a dark grey colour. The shabraque was red laced white (silver lace for the officers). A white flag would be the Colonel's/Regiment's flag, a green flag for the squadron.

The officers jacket is red laced silver, the trumpeters jacket a brown colour (burnt sienna) with white hoops on the arms, the trooper's jackets are a darker grey. I have added a few with buff coats for protection. All wear the orange sash to denote service in the army of the the United Provices.

I haven't found the motto for the flag yet, I'll add the lettering if I do. I'm acquiring a copy of Wargames Illustrated #173 february 2002 with Mark Allens article on William III Dutch cavalry.

Just figured out Mark Allens handwriting the motto is 'PACEM ARMIS QUERO' loosely translated as: 'peace by force of arms'."


I hope you will find it somehow useful .
Cheers !

by Motorway
Yes, but the question is, were these the same uniforms as in 1672-1678, given the fact that every four years new uniforms were issued?

by kingscarbine
Thanks for the useful tips.

I found this very interesting painting by Matthys Naiveu of a cavalry officer in 1675: https://www.bonhams.com/auctions/15322/lot/31/

In the sketch bellow of a detail of Romeyn de Hooghe's Siege of Naarden in 1673
are a couple of Dutch cavalrymen playing dice.

There are many interesting details in this print including Spanish cavalry and if you look at the Spanish to the right they seem to be dressed in an old fashion way.

by Motorway
The sketches are made by Hoynck van Papendrecht, showing above the Courland Dragoons.

by kingscarbine
Yes it is. The two cavalrymen seem to be "shooting craps" with a Dragoon. Here's the link to : http://www.collectie.legermuseum.nl/asp ... iatheek&q=