I've purchased most of the buildings I will need, and know how to build the trees and endless hedges I will need.

My question is about the village church.

Were English churches like those on the Continent, where the church itself was surrounded by a wall, forming somewhat of a natural bastion? Or were the churches more open?

Same question about the cemetaries. Did they have their own walls, or were they surrounded by the churchyard wall? Were they attached to the church, or located separately? Did that change based on whether an area was primarily Puritan (where the cemetaries were often considered "secular," not religious) and more Episcopal/Catholic?

Finally, what would a village church look like, should I build one instead of buy one?

Thanks!
With Gen'l Custer Down in Mexico: Yes, one of the goals is to see how many times one can get him killed.
Top

Rob.
Most English Churches of the 1640’s would have been of medieval date. They tend to sit in the middle of their associated grave yards - so you should have some open space and grave stones scattered around your church building. (In the UK separate grave yards located away from chapels/churches are more associated with later, so called none conformist faiths like Methodism – or they are post industrial revolution burial grounds created because many medieval church yards were full. Their effects would not have been seen until after the ECW).

The graveyard was usually encircled by some sort of ‘barrier’ but this was simply to delineate sacred ground for burial purposes, rather than signify some sort of physical barrier (after all, God’s House is supposed to be open to all…). So it need not be an imposing structure, and if I recall my old archaeology training correctly, most rural village churches in the Middle Ages probably had no wall at all – probably just a low earth bank demarking where the church yard began. By Tudor and Stuart times those wealthy churches with a bit of money to spend and a statement to make probably began building stone/brick walls around their churchyards (so much nicer than that old earth bank or that dilapidated wooden fence don’t you think?) but again these were just demarcation barriers and were often quite low structures (only waist or as low as knee height).

However, having said all that, a few ECW churches would certainly have made for a formidable defensive position in military terms. Especially those built on slightly raised ground, or some low promontory at one end of the village. Because of the higher elevation these churches often DO have quite high walls surrounding their church yards, which acted (in part) as an earth retaining wall. A defender standing inside the church yard might be looking out over a wall no more than waist height, but a potential attacker below him might be looking up at the top of the same wall a foot or two above his head!

As for the overall look of English churches – well styles vary from region to region, but for a good generic building the 28mm Hovels church is OK. The spire is a bit continental, but it would pass...

For something quintessentially English something like this would be better –

but sadly Hovels only do this in 15mm

Salutations
DPT
Last edited by Duke of Plaza-Toro on Wed Feb 22, 2012 5:48 am, edited 1 time in total.
In enterprise of martial kind, When there was any fighting, He led his regiment from behind -
He found it less exciting.
http://worldcrisisinminiature.wordpress.com/
Top

Oh - and churchyard gate ways (lychgates) can be quite imposing structures, but note how relatively low the rest of the churchyard wall is - 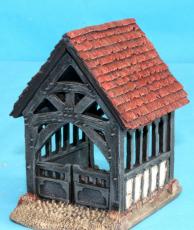 They also make a huge church (at a huge price) but also lots of separate tower and spire bits which might help if you decide to build your own. (Have a look in their 28mm Medieval / 30 Years War range)

DPT
In enterprise of martial kind, When there was any fighting, He led his regiment from behind -
He found it less exciting.
http://worldcrisisinminiature.wordpress.com/
Top

The Grandmanner church is awesome, with a capital AWE.
They also have a graveyard, liche gate and perimeter wall to go with it.

I need to restrain myself from buying the painted version and then a bunch of german paras and GI's in 28mm every time I look at the website. The fiscally prudent side of my brain hope it sells out soon

My painted Spanish Village deal was posted yesterday apparently, so I'll have that to look forward too when I get back at the weekend.

It's not set in an ECW setting but you can see The LoA 'church' in the Gallery Section - LoA on Tour - Walcourt demo game. It is the Grand Manner church with wall sections and 'gate'. Although it has 'the spire', I've also got the 'castlated/flat tower top' that can inter-change with the spire - more ECW/English looking.

We are using it at our LoGW ECW game in June and with the types of buildings next to it in the pictures, I think it will work nicely for this period.

Having had a chat with Dave Bodley at a recent photo shoot for WI that we were both at (Barry, Toggy Bob and I played a Crimea Game on Dave's new custom built Crimea terrain), we chatted about 'said church' that Dave had supplied. Unfortunately Dave had these as a 'limited edition' and he tells me they are 'sold out'.

However....if you contact him he mave have 'walls and gate' available?

I guess I may have to build my own or wait. The graveyard and walls I already have, and at least the liche gate is affordable. Maybe the church will just have to have been torched as "too Catholic" for a while. Darn Puritans.
With Gen'l Custer Down in Mexico: Yes, one of the goals is to see how many times one can get him killed.
Top

Try pmc.games on e bay. They sell some very nice, prepainted and in my opinion very cheap 28mm resin cast buildings. I have 2 churches bought from them and they are very nice.You can buy gravestones from hovels or warbases
Top

j1mwallace wrote:Try pmc.games on e bay. They sell some very nice, prepainted and in my opinion very cheap 28mm resin cast buildings. I have 2 churches bought from them and they are very nice.You can buy gravestones from hovels or warbases

I have a bunch of their buildings on the way. Shipping is dear, however . . .
With Gen'l Custer Down in Mexico: Yes, one of the goals is to see how many times one can get him killed.
Top
Post Reply
8 posts • Page 1 of 1